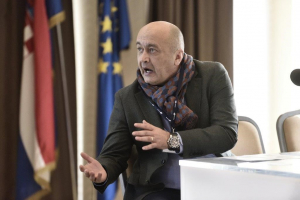 Born on March 31, 1964 in Sarajevo where he completed elementary and high school education, and graduated from the University of Sarajevo, School of Medicine in 1988. He took and passed the Board Certified Exam in Internal Medicine at the University Clinical Center Sarajevo in 1998. He spent two years at the Institute of Oncology in Ljubljana and the European Institute of Oncology in Milan, Italy, as a recipient of the ESMO endowment for sub-specialization in medical oncology.

He finished post-graduate studies in May 2001 and during 2013/2014, he completed postdoctoral one-year education program POLE (Program for Oncology Leaders in Europe) at University Bocconi in Milan.

During his career he was actively included in scientific-research work and along with his colleagues, in the capacity of the chief researcher, was included in over thirty international projects.  He is a member of several professional associations including the American Society of Clinical Oncology (ASCO) and European Society for Medical Oncology (ESMO). He also plays significant role in the Association of Oncologists of Bosnia and Herzegovina. He is member of the European School of Oncology Core faculty list

He is the author and co-author of over thirty articles published in the relevant oncologic journals, editor of the first regional book “Medical oncology”

He is the leader of the project of the Federation of Bosnia and Herzegovina Ministry of Health: “Guidelines on diagnosis and treatment of malignancies”.